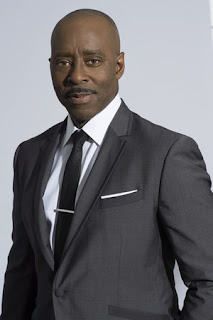 WASHINGTON--(BUSINESS WIRE)--National Geographic, with Imagine Television Studios and Fox 21 Television Studios, announced that the Emmy- and Tony Award-winning actor Courtney B. Vance (“The People v. O.J. Simpson: American Crime Story”) will star opposite previously announced Cynthia Erivo (“Harriet,” Broadway’s “The Color Purple”) as Aretha Franklin in the next installment of the Emmy-winning global anthology series GENIUS: ARETHA. Additionally, Suzan-Lori Parks (“Topdog/Underdog”) will serve as showrunner and executive producer and Anthony Hemingway (“Power,” “The People v. O.J. Simpson: American Crime Story”) will executive produce and serve as the producing director for the upcoming season. Filming will start this December for a spring 2020 premiere on National Geographic channels in 172 countries and in 43 languages.

Vance joins as Aretha’s father, C.L. Franklin, an influential reverend and civil rights activist known as the “Million Dollar Voice.” A star in his own right, C.L.’s legendary sermons were published and sold in record stores and broadcast on a weekly radio show, and he booked national ministry tours and public appearances. C.L. had a close but fraught relationship with his daughter and supported her throughout her career, most notably when he encouraged her transition from singing gospel to more popular genres. The role marks a return to a Fox 21 Television Studios production for Vance, who starred as Johnnie Cochran in the critically acclaimed series “The People V. O.J. Simpson: American Crime Story”, for which he won the Emmy for Lead Actor in a Limited Series and Critics’ Choice Award for Best Actor in a Movie/Miniseries, and was nominated for a Golden Globe and a SAG Award.

Vance’s acclaimed and powerful performances have been featured on Broadway, television and in film, with additional achievements including two Tony awards for Best Actor in “Lucky Guy” and “Six Degrees of Separation.” His work has extended to many notable TV series and movies including “Ben is Back,” “Isle of Dogs,” “Civil,” “Libby and Malcolm,” “The Mummy,” “The Immortal Life of Henrietta Lacks,” “Office Christmas Party,” “The Lawn Chair,” “Scandal,” “Masters of Sex,” “State of Affairs,” “Revenge” and many more.

“It’s an honor to join the Genius: Aretha team, and to bring to life the magnificent story of the Queen of Soul, an amazing woman who my wife, Angela, and I loved dearly,” said Vance, who also received a Grammy nomination earlier this year for Best Spoken Word Album for his narration of Neil deGrasse Tyson’s Accessory To War. “Aretha’s father, C.L. Franklin, had a profound impact on her trajectory from a girl in a gospel choir to a global phenomenon—both in a good way and a bad way. I’m eager to dive into his story, and to have the tremendous opportunity to work with the undeniable talents of Suzan-Lori Parks and Cynthia Erivo. And I’m always excited to work with Anthony Hemingway.”

“Courtney B. Vance is an actor whose work I’ve admired for so long,” said Parks. “To have him bring his award-winning talents to the role of C.L. Franklin, a man of great conviction who also had many flaws, is a beautiful dream come true.”

GENIUS dramatizes the fascinating stories of the world’s most brilliant innovators, exploring their extraordinary achievements along with their volatile, passionate and complex personal relationships. The third season of the anthology series will explore Franklin’s musical genius and incomparable career, as well as the immeasurable impact and lasting influence she has had on music and culture around the world in the first-ever, definitive and only authorized scripted limited series on the life of the universally acclaimed Queen of Soul. Grammy Award winner Franklin was a gospel prodigy and outspoken civil rights champion and is widely considered to be the greatest singer of the past 50 years, receiving countless honors throughout her career.

Without knowing how to read music, Franklin taught herself to play the piano; at the young age of 12, she began to record songs and sing on gospel tours with her father. She signed her first record deal at age 18 with Columbia Records. In 1966 she moved to Atlantic Records, where she recorded many of her most iconic songs. In 1979 she began a 40-year friendship and partnership with Clive Davis, which produced a number of hit songs, including the highest charting and bestselling song of her career, “I Knew You Were Waiting (For Me),” a duet with George Michael. The legendary singer is one of the world’s bestselling musical artists of all time, with more than 75 million records sold globally during her career. Her voice was identified as a “natural resource” by her home state of Michigan.

Imagine has a history of creating timeless and culturally impactful films, shows and documentaries in the world of music, including the Academy Award-winning film “8 Mile,” the Grammy Award-winning documentary “The Beatles: Eight Days a Week — The Touring Years,” the critically acclaimed documentary “Pavarotti” and the Emmy-winning television drama “Empire.” The company also produced the film “Get on Up” about James Brown, and many documentaries, including “Jay Z’s Made in America,” “Katy Perry: Part of Me” and “Once Were Brothers: Robbie Robertson and The Band.” Imagine is currently in production on the Hulu series “Wu-Tang: An American Saga” and the sixth season of “Empire”; it is also developing a film version of the musical “tick, tick … BOOM!” with Lin-Manuel Miranda directing, and a documentary about legendary musician Louis Armstrong.

Vance is represented by WME and Fox Rothschild.