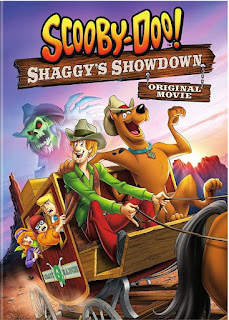 A long-lost cousin, Tawny invited Shaggy to her ranch so they the cousins could reconnect, but the reunion is being ruined by the ghost of a notorious outlaw, Dapper Jack Rogers (John Schwab).  The ghost bears a striking resemblance to Shaggy, who, like Tawny, is a descendant of Dapper Jack.  The ghost has been terrorizing Sorghum City and also the Crazy Q Ranch, and if the ghost continues its haunting, Tawny will be forced to sell the ranch.  Now, Shaggy, Scooby, Fred, Daphne, and Velma have a new ghostly mystery to solve.

Scooby-Doo! Shaggy's Showdown is the third consecutive Scooby-Doo animated film I have seen that I really like.  I think that one thing that makes this one appealing to me is the dude ranch element.  I have been a fan of films set on dude ranches, and I have enjoyed TV series in which the characters visit a dude ranch for a particular episode.  Combine a dude ranch with my love of the Scooby-Doo and Mystery Inc., and that is entertainment I cannot resist.

So take my recommendation with a grain of salt off the table at a dude ranch when I tell you that Shaggy's Showdown is one of the best recent Scooby-Doo movies.  I like the animation, especially the color, and there are some good subplots:  Shaggy riding a horse, Scooby's ability to “talk” to farm animals, and a child overcoming his fear of horses all make this particular straight-to-video Scooby-Doo film exceptional.

Seriously, Scooby-Doo! Shaggy's Showdown is a nice change of pace for the series.  A quasi-Western comedy, it means that the Scoody-Doo DVD animated movies can show a bit of freshness now and then.

Posted by Leroy Douresseaux at 3:18 AM