Review: "Avengers: Endgame" is All A-Game 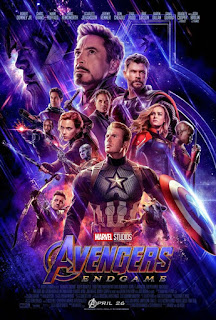 Avengers: Endgame is a 2019 superhero movie directed by Anthony and Joe Russo and produced by Marvel Studios.  The film is the direct sequel to 2018's Avengers: Infinity War and is the 22nd film in the “Marvel Cinematic Universe” (MCU).  This film is also based on the Avengers comic book created by Stan Lee and Jack Kirby.  Endgame finds the Avengers and their remaining allies assembling once more to restore a universe devastated by their greatest enemy..

Avengers: Endgame opens three weeks after Thanos (Josh Brolin) used the Infinity Stones to disintegrate half of all life in the universe.  The Avengers and their allies make a vain attempt to force Thanos to undo what the snap of his fingers wrought, but that mission ends in disaster.

Five years later, Black Widow/Natasha Romanoff (Scarlett Johansson) oversees the surviving heroes:  Captain America/Steve Rogers (Chris Evans); War Machine/James Rhodes (Don Cheadle), Okoye of Wakanda (Danai Gurira) as they protect Earth.  Rocket (Bradley Cooper) and Nebula (Karen Gillan) of the Guardians of the Galaxy and the newly arrived Captain Marvel/Carol Danvers (Brie Larson) patrol the rest of the universe.  It is a time of sadness where there is little hope.

Then, Ant-Man/Scott Lang (Paul Rudd) appears out of nowhere, claiming to have escaped the Quantum Realm, and he believes that this realm may provide a way to reverse what Thanos did.  First, the remaining Avengers will have to convince estranged Avengers:  Iron Man/Tony Stark (Robert Downey, Jr.), Hulk/Bruce Banner (Mark Ruffalo), Thor (Chris Hemsworth), and Hawkeye/Clint Baron (Jeremy Renner) to return to the fold.

Avengers: Endgame is one of the best superhero films ever made and one of the best films ever adapted from a comic book.  There is so much going on in this film that it seems impossible to review it, but I will try.  I can say simply and with as few words as possible that the acting, directing, writing, cinematography, film score, editing, production design, sound mixing/editing, and special effects and visual effects are all of exceedingly high quality.  They are all as good as you would hope, and I can say that often in this film, they are even better than we would expect.

Avengers: Endgame is not really about the future of the Marvel Cinematic Universe.  Rather,  Endgame resolves the story that began in Avengers: Infinity War.  It revisits some past films and offers closures and happy endings regarding some characters and key moments in past Marvel films.  Avengers: Endgame is the kind of happy ending the greatest modern film studio, Marvel Studios, absolutely had to deliver after giving us so many unbelievably popular and high-quality films.


Posted by Leroy Douresseaux at 10:22 AM