Review: "Fantastic Beasts and Where to Find Them" is Beastly Good 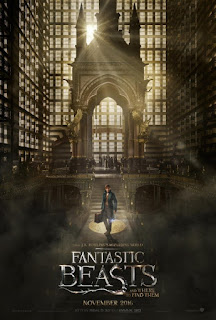 In 1926, British wizard and "magizoologist" Newt Scamander (Eddie Redmayne) stops in New York City on his way to Arizona.  Scamander also carries with him a magical suitcase full of fantastic beasts, and one of them, a “Niffler,” escapes into the city.  During his quest to recapture the Niffler, Scamander meets a “No-Maj” (does not have magical powers) named Jacob Kowalski (Dan Fogler), after they unwittingly swap suitcases.

This confusion brings Scamander into contact and conflict with Porpentina “Tina” Goldstein (Katherine Waterston), a demoted auror (hunter of dark wizards), who belongs to the Magical Congress of the United States of America (MACUSA).  Scamander also meets Tina's sister, Queenie (Alison Sudol), a flapper who has amazing powers of memory.  Now, the four of them are caught in a conspiracy involving one or more escaped beasts, with one of them being very dangerous.  Scamander has been searching for this creature, and to find it and protect it may cost him his life.

Fantastic Beasts is an adult urban fantasy which presents a perilous world of magic where secrets must be kept, even unto penalty of death.  War between the world of wizards and witches and the world of the No-Maj slash humans without magical powers seems like a genuine threat in this narrative.  [In the Potter films, humans without magical powers are referred to as “muggles.”]

There is something on the line for the character; they have something to lose, and perhaps, some could lose everything, including their lives.  So the audience buys into this story.  Fantastic Beasts is not some mere, spin-off, sequel/prequel, event movie.  It is all in the writing of of J.K. Rowling's script; she makes the story matters, and once again, director David Yates understands the most important elements of Rowling's writing.  The bonds of family and friendship; the motivations of characters; the conflict central and peripheral; and good versus evil, and Yates and Rowling deliver strongly on these.

Fantastic Beasts also separates itself from the Potter films with a cast of characters that is far more eccentric than the characters Potter delivered (and there were oddballs in that lot).  Oscar-winning actor Eddie Redmayne manages to make a introverted, strange little man into a strong lead and resilient lead character that the audience will follow, even when Redmayne makes it obvious that Scamander does not want anyone following him.

Katherine Waterston makes Tina worthy of her own film.  In her feature film debut, Alison Sudol is pitch perfect as Queenie, and Dan Fogler surprises as Jacob.  In fact, all of the cast is good – from Colin Farrell's perplexing Percival Graves to Ezra Miller's troubled Credence Barebone.  Fantastic Beasts delivers complex and engaging characters.

Posted by Leroy Douresseaux at 5:39 PM