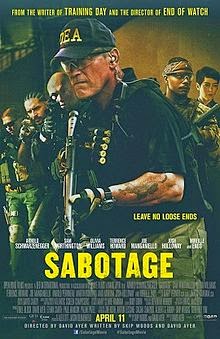 CRIME/THRILLER with elements of action, drama and mystery

Sabotage is a 2014 crime thriller co-written and directed by David Ayer.  The film stars Arnold Schwarzenegger as the leader of an elite DEA task force that is being hunted after they take money from a drug cartel safe house.

Sabotage focuses on John “Breacher” Wharton (Arnold Schwarzenegger), the commander of an elite Drug Enforcement Agency (DEA) Special Operations Team.  During a raid on a drug cartel safe house, the team steals 10 million dollars from the cartel's massive stash of cash.  However, the team members are unable to hide the fact that some of the cartel's money is missing from their DEA superiors, and the money also disappears from the place where the team hid it.

Six months later, team members find themselves being murdered one by one.  Wharton joins local police Investigator Caroline Brentwood (Olivia Williams) in an attempt to discover who is killing members of his team.  Why are they being killed?  Where is the money?  Are the answers closer than Wharton and Brentwood would like to admit?

Sabotage is a muddled mess.  In many of these reviews, I talk about what the movie should have been or could have been.  Sometimes, I even guess what story the director and writer(s) were trying to tell.  In the case of Sabotage, I am not sure what the filmmakers wanted to give us.


Posted by Leroy Douresseaux at 6:41 AM