Review: "The Amazing Spider-Man 2" Entangled in Too Many Angles 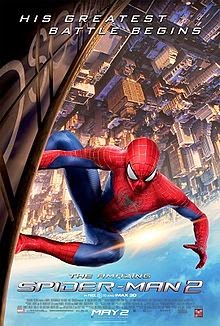 TRASH IN MY EYE No. 43 by Leroy Douresseaux

The Amazing Spider-Man 2 begins as Peter Parker (Andrew Garfield) and his girlfriend, Gwen Stacy (Emma Stone), are about to graduate from high school.  Peter is also loving his life as the costumed, crime-fighting superhero, Spider-Man.  Peter, however, is currently haunted by the specter of police Captain George Stacy (Denis Leary), Gwen's deceased father.  As Capt. Stacy lay dying (in the previous film), Peter promised him to keep Gwen out of his life because of Spider-Man.  Peter reluctantly tries to break up with Gwen, but the two teenagers deeply love each other.  Peter's attempts simply sow confusion.

Meanwhile, at OsCorp Industries, Peter's former friend, Harry Osborn (Dane DeHaan), returns to New York City in time to take over the business of his recently deceased father, Norman Osborn (Chris Cooper).  OsCorp's past as a company on the cutting edge of controversial genetic research, however, threatens both Harry and Peter.  Also, a new villain, Electro (Jamie Foxx), appears.

The Amazing Spider-Man 2 lacks focus, and I think that there are two reasons for that.  First, the screenplay wants to be a story of young romance, but the romance and character drama are overwrought.   Andrew Garfield and Emma Stone give good performances, but Peter and Gwen's relationship is like a car stuck in mud and pointlessly spinning its wheel.  The car isn't going anywhere, and until the end, neither is Peter and Gwen's relationship, and then, that is only for tragic affect.

I think the second reason that The Amazing Spider-Man 2 seems muddled is because it is more than just a superhero movie; it is the birth of an expanded universe.  Sony, Columbia Pictures' parent, wants to take some of the characters that belong to Marvel Comics' line of Spider-Man comic books and use them to expand their Spider-Man film franchise into a Spider-Man universe.  They want something like Marvel Studios' “Marvel Cinematic Universe.”  Why have just Spider-Man movies when you can have movies starring Spider-Man adversaries like Venom and the Sinister Six.

The Amazing Spider-Man 2 has an engaging visual style, and it is probably at its best when it depicts Spider-Man swinging over New York City, through its canyons and around its buildings and skyscrapers.  Even the fight scenes, which seem tacked on to the story, look good, when they focus on Spider-Man.  Nothing about Electro looks good.  Hopefully, the third installment of The Amazing Spider-Man can be itself, a stand-alone movie that does not have to carry the hopes of Sony's corporate board and accountants.

Posted by Leroy Douresseaux at 9:10 AM