Review: "14 Blades" is Martial Arts with Western and Persian Stylings 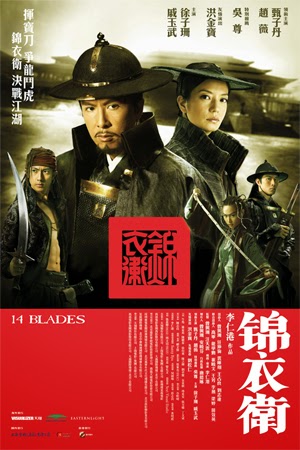 14 Blades is a 2010 martial arts (wuxia) and historical drama from director Daniel Lee.  The film, a co-production of China and Hong Kong, received a limited theatrical release in August 2014 after making a film festival appearance in 2011.  14 Blades focuses on an imperial secret agent who is hunted while he tries to stop a conspiracy against the Emperor.

14 Blades opens in China during the late Ming dynasty (a period taking place from 1368 to 1644).  It is a time when the imperial court is plagued by corruption, and the young emperor is incompetent and seems more interested in pleasure than in governing.  He is protected by the Jinyiwei (the Brocade Guard), a secret police force and clandestine royal guard.  They ensure peace and stability and have the authority to execute almost anyone.  Their leader is called Qinglong (Donnie Yen), and he carries with him the Fourteen Blades, a box containing 14 different steel blades with which he executes his duties... and people.

Far from the imperial Forbidden City, the Emperor's uncle, Prince Quing (Sammo Hung), hatches a conspiracy with the traitorous royal eunuch, Jia Jingzhong (Kar-Ying Law).  Their plot involves taking control of the Jinyiwei and betraying Qinglong.  They succeed, and Qinglong soon finds himself wounded, hunted, and on the run.  He finds shelter with Boss Yong Qiao (Ma Wu) and his men in the Justice Escort Agency.  Boss' daughter, Hua Qiao (Wei Zhao), becomes attracted to Qinglong and is determined to assist him in his fight to protect the Emperor and the country from chaos and destruction.

My summary of 14 Blades does not do this epic film justice.  There are enough supporting characters with their own causes and motivations to turn 14 Blades into a television miniseries.  However, the film's core, Qinglong, remains strong, and when the beautiful Hua is added, 14 Blades suddenly has heart, an emotional center to go with the lust for revenge and the film's blistering marital artist action.

Donnie Yen and Wei Zhao give heartfelt, deeply emotional, thoughtful, and strong performances.  They make everything about their respective characters:  external conflicts, internal struggles, motivations, ideals, wants, and love seem genuine and honest.  They are believable and likeable; they draw the viewer to this film.  In fact, like a superstar athlete does for his teammates, Yen and Zhao make their fellow actors betters.  Their characters make the other characters even more interesting and engaging.  I would love to see these two actors in another movie similar to 14 Blades or in a romantic drama.

14 Blades is obviously a martial arts film, but the film also has suggestions of an Ancient Persian romance and an American Western film.  The former comes through in some of the locales, in the costumes, and in certain musical strains in Henry Lai's score.  The latter is also suggested by some of the settings, but also by the staging of some scenes and sequences and in the poses and attitudes of both heroes and villains.  Most notable is the Clint Eastwood-like pose and attitude that Donnie Yen frequently strikes.

That makes 14 Blades something different, even if the story occasionally becomes a bit muddled.  Still, its colorful characters and lavish costumes; to say nothing of the flashy fight choreography makes this movie thoroughly enjoyable.  With its attractive lead couple, 14 Blades, while different enough to stand out from other marital arts films, tells a familiar story of love and bravery that will captivate audiences.


Posted by Leroy Douresseaux at 9:36 AM