THE CONTENDER: The Story of Marlon Brando (Negromancer Book Review) 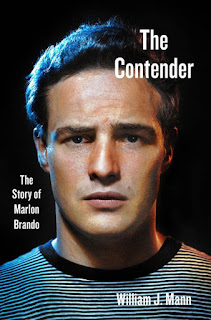 THE CONTENDER: THE STORY OF MARLON BRANDO
HARPERCOLLINS – @HarperCollins @HarperBooks

Marlon Brando the Hollywood legend was born Marlon Brando Jr. on April 3, 1924 to Dorothy Julia “Dodie” (Pennebaker) and Marlon Brando Sr. in Omaha, Nebraska.  He grew up in Libertyville, Illinois (where he met Wally Cox, an actor who would be a lifelong friend), and even attended a military school.  But who was Marlon Brando?

The award-winning film biographer, William J. Mann (Kate: The Woman Who Was Hepburn), presents a deeply-textured, ambitious, and definitive portrait of Marlon Brando.  The greatest movie actor of the twentieth century was also elusive, and Mann brings his extraordinarily complex life into view as never before in the biography, The Contender: The Story of Marlon Brando.

The most influential movie actor of his era, Marlon Brando changed the way other actors perceived their craft.  His natural, honest, and deeply personal approach to acting resulted in performances, especially in A Streetcar Named Desire and On the Waterfront, that are considered to be without parallel.  Americans hailed Brando as the “American Hamlet.”  He was the Yank who surpassed Laurence Olivier, John Gielgud, and Ralph Richardson, the holy trinity and the royalty of British stage and screen, as the standard of greatness in mid-twentieth century acting.

Brando’s impact on American culture, however, went beyond acting.  He was was also one of the first American movie stars to use his fame as a platform to address social, political, and moral issues, and he courageously and boldly called out the United States' deeply rooted, persistent racism.

The Contender illuminates this cultural icon for a new age, and Mann, its author, argues that Brando was not only a great actor, but also a cultural soothsayer.  Mann reveals that Brando was a Cassandra warning America about the challenges to come.  Brando’s admonitions against making financial gain the primary purpose of nearly every aspect of the nation's culture, and his criticisms that the news media's obsession with celebrity and other shallow and ultimately unimportant subjects were prescient.  Many public figures, from fellow Hollywood actors to politicians and media figures, criticized Brando's public protests against racial segregation and discrimination at the height of the Civil Rights movement. Yet less than half a century later, Brando's actions as an activist and an advocate have become the model many actors follow today.

In The Contender, William J. Mann shows the sides of Marlon Brando that many moviegoers never imagined him to have.  From his childhood traumas to the evolution of his professional life and the growing mess of his personal life, Marlon Brando is revealed anew.

THE LOWDOWN:  William J. Mann's biography of Marlon Brando is a story that runs over 600 pages.  That is not counting the section entitled “Marlon Brando Stage and Television Credits;” a two-page “Sources” section; and a 60-page “Notes” section.  Mann's The Contender is not only “psychologically astute” as the book's press materials state; it is also painstakingly and masterfully researched.  Mann's research is based on new material, previously revealed material, and interviews with the people who knew Marlon Brando, some of whom died during the time Mann worked on this book.

Mann's book is not a Hollywood tell-all, nor is it a celebratory festival of Brando's work.  The Contender explores the man that Brando was, and being a ground-breaking, celebrated, and revered actor was only part of the man.  To that end, The Contender and its author told me things that I did not know about Brando.  I did not know that he was “sexually fluid,” having sexual relationships with both men and women.  I did not know that he was a hopeless philanderer and womanizer; Brando cheated on every woman he dated or was married to – often with multiple women.

I did not know that Brando did not consider acting to be something important.  He certainly had a fidelity to his vocation, as seen in his numerous performances on film, but he did not take the profession seriously.  He did not tolerate people whom he believed took acting too seriously.

I had no idea that Brando supported human rights causes for African-Americans and supported the Civil Rights movement, both financially and in person, up to the time of his death.  He participated in numerous marches, including some in the American south.  Brando was also a participant in the 1963 “March on Washington.”  Brando was also a vocal and tireless advocate for Native Americans, which including him declining his best actor Oscar for The Godfather at the 45th Academy Awards on March 27, 1973 in protest of the way the U.S. had treated American Indians.

It is not so much that Mann tells Brando's story in vivid detail, which he does.  It is also that Mann uses his prose to transport readers back to the times and places of many key moments in Brando's life.  Mann puts us there, right next to his subject, and the result is the story that makes you think and feel the man, his life, and his times.  This is a big book for a monumental figure in American culture.  The Contender is a dazzling biography, the kind befitting our nation's greatest actor.

It took me forever to read this biography – seven months.  By the time, I finished, however, I wished there were more.  The Contender: The Story of Marlon Brando is for all time the biography for Marlon Brando fans and admirers, present and future.

[The Contender: The Story of Marlon Brando includes sixteen pages of photographs.]