Review: Her Performance in "Nina" Means Zoe Saldana Has No Reason to Cry 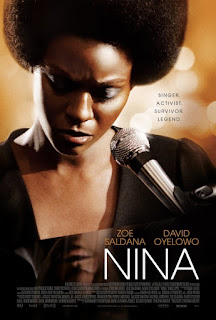 Nina is a 2016 biographical dramatic film written and directed by Cynthia Mort.  The film offers a fictional account of Nina Simone, the Black woman who was an American singer-songwriter, jazz musician, classical pianist, and Civil Rights activist and whose career began in the late 1950s.  Nina takes place over a decade late in her life and examines her relationship with the young man who is suddenly thrust into the position of being her manager.

Nina opens in 1988 and finds beloved singer Nina Simone (Zoe Saldana) alcoholic, mentally unstable, and financially shaky.  After an incident involving a gun, Nina is committed to a Los Angeles psychiatric hospital.  There, she befriends a young nurse, Clifton Henderson (David Oyelowo), who is also a fan of hers.  When she leaves the hospital, Nina hires Clifton as her personal assistant, and he accompanies her back to her home in Bouc-Bel-Air, France.

Once there, Clifton discovers that Nina is not only difficult and confrontational, but that she also refuses to take her medication and prefers drinking alcoholic beverages over eating.  Clifton attempts to salvage Nina's career, but her decades of ill will and a bad reputation among music business players and heavy hitters may derail Clifton's plans for a Nina Simone comeback.

Simply put, Nina is a poorly written movie.  Ostensibly, it is one of those stories about a great, famous, or important person who salvages the wreckage of her life to rekindle an famous public career.  What we get is mostly Nina Simone being stubborn and self-destructive with Clifton Henderson standing by her side, looking sad, angry, or exasperated.

I think Zoe Saldana gives a great performance as this film's Nina Simone.  I say “this film's Nina Simone” because there was a lot of controversy about her casting – especially concerning Saldana's skin tone and physical appearance compared to the real-life Nina Simone's physical characteristics.  Saldana seems to bury her true self in the make-up in order to become a dark-skinned Black woman and emerges as a character who is a fighter fiercely protecting what she believes she has left of herself.  Whatever one might say of this film, I think that there is no doubt that Saldana proves that she is an actress capable of playing the “great roles.”

The problem is that this role is not great, mainly because the writing and directing can only deliver what is barely an average film.  Writer-director Cynthia Mort even finds a way to waste the highly-skilled actor, David Oyelowo.  The passion, artistry, and professionalism he brings to his performances are absent here mainly because Clifton literally just waits around for Nina to throw an over-the-top tantrum.  The screenplay gives Saldana enough material to really be showy with Nina, but that same script gives Oyelowo very little he can use to show off.

I am not a Nina Simone expert, but I know enough about her to know that she is hugely respected and much beloved among music fans, historians, and critics.  In no way does this film come close to doing this kind of woman justice.  Watching this film, I have to wonder what the filmmakers of Nina were thinking.  Luckily, the passion that Saldana obviously brings to this project results in a performance that makes Nina worth watching.