Review: "BOO! 2: A Madea Halloween" is a Typical Inferior Sequel 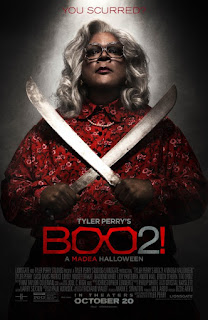 Boo 2! A Madea Halloween is a 2017 comedy and Halloween movie from writer-director Tyler Perry.  It is a direct sequel to Boo! A Madea Halloween (2016) and is also the tenth film in the Madea film series.  In Boo 2!, Madea and friends travel to a supposedly haunted campground to rescue a teen relative, but end up running for their lives from the boogeyman.

Boo 2! A Madea Halloween opens on the 18th birthday of Tiffany Simmons (Diamond White).  Tiffany is the daughter of Brian Simmons (Tyler Perry) and his ex-wife, Debrah (Taja V. Simpson).  Tiffany wants to be treated like an adult, which is just fine with Debrah and her new husband, Calvin (Akende Munalula).  However, Brian still sees Tiffany as a baby girl, and he has planned for Tiffany a birthday party that is more appropriate for a child.

Madea overhears Tiffany's Lake Derrick plans and alerts her father, Brian, who decides to let Tiffany attend the party just to teach her lesson.  Madea is unwilling to let it go at that, so she rounds up Joe, Bam, and Hattie to take a trip to Lake Derrick and rescue Tiffany and Gabriella from that Halloween party.  However, it is Madea and company who will find themselves needing to be rescued from a chainsaw wielding maniac, ghostly sisters, and assorted monsters.

I am playing catch-up on my Madea movies, as this film was released almost two-and-a-half years ago, and the (allegedly) last Madea film, A Madea Family Funeral (2019), was released a year ago.  When I reviewed Boo! A Madea Halloween back in 2017, I wrote that the film had “its moments,” and I gave it a grade of “B-.”  Since that review, I have seen the film countless times, and it has become one of my favorite Madea movies and one of my favorite Halloween movies.  If I graded the original film now, I would give it at least an “A-.”

Boo 2! A Madea Halloween actually has its moments.  The first hour of the film has an awkward pace, and that hour is not well-written.  Early on, Boo 2! seems like nothing more than a quickly-produced sequel meant to grab cash from a surprise hit movie.  The final forty minutes of t Boo 2! really picks up, and it gets close to being as funny as the original film.

So if you did not get enough Boo! A Madea Halloween and want a little more, you have Boo 2! A Madea Halloween.  And if you need to see every Madea movie, then, you will want to see Boo 2!  If you don't like Madea, well...