Review: "Once Upon a Time... in Hollywood" is a Sparkling Fairy Tale 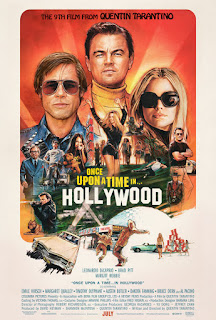 Once Upon a Time... in Hollywood is a 2019 comedy-drama and historical film from writer-director Quentin Tarantino.  The ninth film from Tarantino, it focuses on a faded television actor striving to maintain fame and success in the film industry during the final years of Hollywood's “Golden Age” in Los Angeles of 1969, with his TV stunt double at his side.

Once Upon a Time... in Hollywood opens in February 1969.  Veteran Hollywood television actor, Rick Dalton (Leonardo DiCaprio), fears that his career is rapidly fading to nothing.  Dalton was the star of the 1950s Western television series, NBC and Screen Gems' “Bounty Law” (a fictional show).  He believes that he has now been reduced to appearing as a guest star on TV series featuring new star actors, usually playing the villain.  Casting agent Marvin Schwarz (Al Pacino) recommends that Dalton move to Italy to make “Spaghetti Westerns,” which Dalton feels are beneath him.

At Dalton's side is his best friend and stunt double, Cliff Booth (Brad Pitt), a World War II veteran who is a stuntman that is highly skilled in hand-to-hand combat.  Booth lives out in the boonies in a tiny trailer with his pit bull, “Brandy,” and he drives Dalton around Los Angeles because Dalton's driver's license has been suspended due to a DUI.  Booth is also currently struggling to find stunt work in Hollywood because of rumors that he murdered his wife.

Meanwhile, hot young actress, Sharon Tate (Margot Robbie), and her husband, one of the hottest young directors in Hollywood, Roman Polanski (Rafal Zawierucha), have moved next door to Dalton.  Dalton dreams of befriending the couple in a bid to help revive his declining acting career.  Months later, late in the evening of August 8th and in the very early moments of August 9th, 1969, both Dalton and Booth will have a chance to change their own fates and that of Tate and her friends.

Quentin Tarantino's Oscar-winning, 2009 film, Inglourious Basterds, is a bracing, gripping, hugely entertaining, and brilliantly-made film.  However, I am always put-off by its alternate-history last act, which has some splendid moments and a genius final scene, but also has that kill Hitler thing.

However, there are two segments towards the end of the film that make Once Upon a Time... in Hollywood a truly great film and one of 2019's very best.  First, there is Cliff Booth's visit to the “Spahn Ranch,” a sequence that is scarier than most entire horror movies and has more tension than most crime thriller films have in their entire story.  The second great segment is the film's final half-hour, which is the kind of film-making that only a genius filmmaker can create.  Without spoiling the film, I can say that this finale, which alters history and which is largely driven by graphic violence, had me cheering and screaming like a madman as I was watching it shortly after one o'clock in the morning.  This last half-hour was the catharsis that I did not realize that I had needed for decades.

Now, that I have praised Tarantino and his artistic and technical collaborators, I need to praise the acting.  Most all of the small performances are quite good.  The three performances that drive Once Upon a Time... in Hollywood are given by Leonardo DiCaprio as Rick Dalton, Brad Pitt as Cliff Booth, and, in a somewhat smaller part, Margot Robbie as Sharon Tate.

DiCaprio fashions a fading TV star in Dalton that is so convincing that I had to convince myself that Dalton is a fictional character and not a real-world actor.  Pitt finally received the acting Oscar he has been long overdue for creating in Booth, a rich character filled charm, pathos, and soul.  Robbie plays Sharon Tate as a happy spirit, embracing her craft and profession with innocence that is not naive and with a joy that dispels at least some of the darkness that was closing in on the last days of the 1960s and on “old Hollywood.”  Robbie gives Tate a love of people that provides this fairy tale of a film with the smattering a fairy dust that it needs.

And that is what Once Upon a Time... in Hollywood really is.  It is a fairy tale, complete with a lurking darkness and edginess, that is an ode to the world in and around a Los Angeles and a Hollywood that existed more in perception than in reality.  And once again, I can say that in Once Upon a Time... in Hollywood, Tarantino has made a movie that no one else could ever make.


The text is copyright © 2020 Leroy Douresseaux. All Rights Reserved. Contact this blog or site for reprint or syndication rights and fees

Posted by Leroy Douresseaux at 2:36 AM