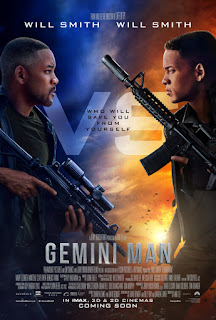 Gemini Man is a 2019 science fiction and action-thriller film from director Ang Lee and starring Will Smith.  The film focuses on an aging hit man who faces off against a younger version of himself.

Gemini Man introduces Henry Brogan (Will Smith), a government assassin who is considered the best assassin of his generation.  After completing an assassination mission in Europe that turns complicated, Henry decides to retire.  However, the government agency for which Henry kills, the Defense Intelligence Agency (D.I.A.), decides that it is time to permanently retire him, and sends an assassination squad to kill him.

Henry kills the team, and rescues a fellow D.I.A. agent, Danny Zakarweski (Mary Elizabeth Winstead), who had been watching him.  Henry and Danny turn to a longtime associate of Henry's, Baron (Benedict Wong), who flies them to Bogata, Colombia.  There, Henry plots his next move, but what he doesn't know is that a D.I.A. supervisor, Clayton “Clay” Varris (Clive Owen), head of a top-secret black ops unit code-named “GEMINI,” has marked him for death.  And the assassin Clay has sent to kill Henry may be the most-perfect assassin to take down the world's best assassin.

While watching Gemini Man, I thought the film reminded me of one of those mid-1990s action movies that had science fiction elements.  I am thinking of director John Woo's Nicolas Cage vs. John Travolta film, Face/Off (1997), or director Chuck Russell's Eraser (1996), starring Arnold Schwarzenegger.  Sure enough, I later learned that Gemini Man was originally meant to go into production back in 1997, but it ended up in “development hell” until producer David Ellison bought the rights.

They really don't make movies like Gemini Man anymore.  Our current movie action heroes are superhero action heroes like Black Panther, Captain America, and Iron Man, and, quite frankly, their films are better than Gemini Man is.

Actually, Gemini Man starts off pretty strongly, kind of like a slightly less polished version of a Jason Bourne film.  The first hour or so of Gemini Man is tense, thrilling, and filled with mystery.  However, once the mystery is solved and once the film reveals the identity and origin of the killer (code-named “Junior”) sent to kill Henry Brogan, the tension and drama of the film is let out like air out of a balloon.  There is an fierce “final battle” in the film's last act, and there is a feel-good, if not weird, happy ending, but the atmosphere of high-tech thrills that initially filled Gemini Man is gone.

The special effects in Gemini Man look like special effects – in a too obvious way.  The computer-generated 23-year-old Will Smith sometimes looks weird and plastic.  I don't want to use the word “awful,” but...  I think Marvel Studios did a much better job creating a younger face for Samuel L. Jackson/Nick Fury in this year's blockbuster, mega-smash hit film, Captain Marvel.

Anyway, the performances are good, but not great.  Will Smith's performance as Henry Brogan is practically the same he gave in his previous sci-fi action-thriller, I, Robot (2004).  It is good to see that Mary Elizabeth Winstead can play an adult, and Benedict Wong is proving to be a winning character actor in roles that provide both comic relief and wit.  As usual, Clive Own proves that he can do mean, but his Clay Farris is much more menacing early in Gemini Man.  By the end of the film, Farris is practically a cartoon villain.

Gemini Man is a good and entertaining film.  It could have been so much better though; in fact, (as I keep saying), the beginning is really good and holds the promise of being the start of an exceptional action film.  Alas, Gemini Man is not exceptional.  If you are a Will Smith fan, Gemini Man is not so good that you have to see it in a theater; you can certainly wait for the home media release.