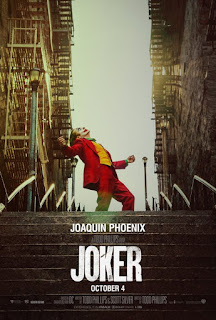 Joker is a 2019 crime drama from director Todd Phillips.  The movie offers a gritty character study and new origin story of The Joker, the classic Batman villain who first appeared in Batman #1 (cover dated: Spring 1940).

The film opens sometime in the early 1980s.  Gotham City is in a state of chaos because of political and social turmoil and also because of class conflict between the extremely wealthy and powerful and the ordinary citizens.  Gotham is also in the middle of a mayoral election and a strike by the sanitation workers, which means that no one is picking up the garbage.  Trash bags and refuse line the streets, and this has created a rodent problem so bad that people are talking about “super rats.”

Living in poverty and being mostly a loner, Arthur Fleck feels he has been disregarded by society.  All his life, it seemed to him that no one even noticed that he existed, so he always wondered if he really existed.  Now, two unexpected incidents in a single day will change his life.  One is an accident and mistake that costs Arthur his job.  The other is a violent act of self-defense that will leave an already shocked city aghast.  But not everyone is appalled by the man who will become “Joker.”

After all the controversy and worry that it would inspire lonely, young men (particularly “incels,” the “involuntarily celibate”) to violence, Todd Phillips' Joker, the comic book movie that is not a comic book movie, turns out to be a somewhat more personal film and, on the part of Joaquin Phoenix, a more intimate performance than one would expect from all the hullabaloo.  Joker portrays the descent (or ascent?) of a man from mentally-ill invisible man to psychopathic murder and celebrated figure.

I don't know if Joker is Phoenix's best performance, because as good as the Oscar-nominated actor is here, this millennium has seen him deliver tour-de-force performances in varied roles across a variety of films.  If he deserves to be nominated for an Oscar or even win one for his performance in Joker, this performance is just the latest example of actor-as-artist who has been in full bloom for quite awhile.  Phoenix's performance as Arthur fleck is both gut-wrenching and utterly entertaining.  He manages to be both dark and light, pitiful and deadly in a role and performance that is too complex to describe in a paragraph or two.  I can say that in the annals of films based on comic books, Phoenix as Arthur Fleck is an immortal work of art.

Director Todd Phillips and his co-screenwriter, Scott Silver, have created a movie that is an evolution in the comic book film genre.  However, most comic book movies are meant to be popcorn entertainment, even when they are deeply thoughtful, poignant, and/or dramatic.  I believe that Joker is not meant to change the direction of such films coming from Marvel Studios' Marvel Cinematic Universe (the MCU) or from Warner Bros. line of DC Comics-inspired films.  Like Christopher Nolan did with his film, The Dark Knight (2008), Phillips points towards a different direction for comic book films with Joker.  I think that The Dark Knight partly inspired Marvel's Captain America: The Winter Soldier (2014), so, in the next five years, I expect to see at least one great comic book movie following in the inspired dance steps of Joaquin Phoenix's Joker.

The film has good supporting performances; for me, Robert De Niro as television talk show host, Murray Franklin, and Zazie Beetz as “love interest,” Sophie Dumond, who makes the most of her relatively small role, are standouts.  The crazy, ominous, gorgeous film score by Hildur Guðnadóttir is also one of the film's most special elements.

In Joker, Joaquin Phoenix and Todd Phillips have created something scary, beautiful, fantastic, exhilarating, funny, and dazzling.  I will admit that sometimes it scared me and made me uncomfortable, but I love it all the more because of that.  Joker is a bravura act of cinema.