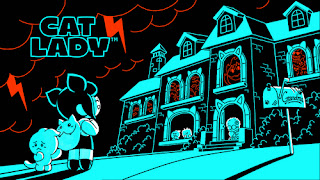 San Francisco, CA – VIZ Media announces CAT LADY, a new feline-flavored supernatural action game. CAT LADY is currently in production by Rose City Games, and set to be published by VIZ Media as part of an ongoing partnership between the companies to develop, produce and release original indie video games.

CAT LADY is among the diverse multimedia and video game properties to be showcased and available for consumer product license at Licensing Expo 2019, the world’s largest and most influential annual licensing industry event (VIZ Media, Booth R202, June 4 – 6, 2019).

VIZ Media and Rose City Games inaugurated a partnership earlier this year with their first video game release – THE WORLD NEXT DOOR. The award-winning game follows Jun, a rebellious teen, who finds herself trapped in the parallel world inhabited by magical beings and a rich narrative and fast-paced, real-time puzzle battles that combines the emotional storytelling and thrilling action of anime and indie gaming. Developed by Rose City Games and published by VIZ Media, THE WORLD NEXT DOOR is available now for the Nintendo SwitchTM console and also for PC/MAC.

For more information on CAT LADY and to follow the game, please visit catladygame.com.


About CAT LADY
It’s a Feline Flinging Frenzy! Ally Marie arrives at Grandma's mansion only to find an ancient evil has taken hold. It will be up to her and Grandma’s cats to set things right!

About Rose City Games
Rose City Games is an independent game studio based out of Portland, OR.  Their mission is to make better games, by assembling teams of passionate developers for whom hard work, authenticity, and creativity are a top priority. Founded by indie game community organizers Will Lewis and Corey Warning in 2015, the studio has produced a game jam event for Cartoon Network, helped launch Headmaster for PlayStation VR, and activated the local development scene by organizing the Portland Indie Game Squad.

About VIZ Media, LLC
Established in 1986, VIZ Media is the premier company in the fields of publishing, animation distribution, and global entertainment licensing. Along with its popular SHONEN JUMP brand and blockbuster properties like NARUTO, DRAGON BALL, SAILOR MOON, and POKÉMON, VIZ Media offers an extensive library of titles and original content in a wide variety of book and video formats, as well as through official licensed merchandise. Owned by three of Japan's largest publishing and entertainment companies, Shogakukan Inc., Shueisha Inc., and Shogakukan-Shueisha Productions, Co., Ltd., VIZ Media is dedicated to bringing the best titles for English-speaking audiences worldwide.

Posted by Leroy Douresseaux at 2:08 AM