Review: "Us" Comes After Us 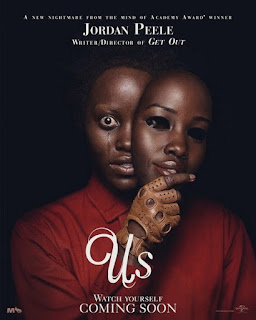 HORROR with elements of mystery and thriller

Us is a 2019 horror film written and directed by Jordan Peele.  The film focuses on a family terrorized by group of doppelgängers.

Adelaide Wilson (Lupita Nyong'o) is married to an ambitious man, Gabriel “Gabe” Wilson (Winston Duke), and the couple has two precocious children, daughter Zora (Shahadi Wright Joseph) and son Jason (Evan Alex).  When she was a child, young Adelaide (Madison Curry) had a terrifying experience at the boardwalk at Santa Cruz beach after she wandered away from her parents and entered a hall of mirrors.  Now, something from her past has returned,  “Red” and “Tethered,” it threatens her family and everything she believes.

I consider Jordan Peele's Get Out to be a landmark film, with its allusions to the dangers people of color, especially African-Americans, face in America.  When you get past that, Get Out is also a clever allegory to the enslavement and exploitation of black people by white people.

Jordan Peele's new film, the much anticipated Us, is one I think that I will spend days... or even longer... unpacking.  Saying that this film has themes of oppression, the crisis of human existence, and the difficulty of really knowing even the people closest to you is just to scratch the surface.  This movie is multi-layered and rife with allegories, metaphors, and symbolism, so much so that I think that some commentators have bought in too much to the idea that this film's most dominate idea is that we are our own worst enemies.  The film does indeed point that out, but much of this film's narrative delves into the nature of evil and the suffering of the oppressed.  One might even describe this film as being about a slave insurrection, but that might be a bit too much of a stretch for some viewers, especially those who think Green Book is just the movie we need for these times in America.

That aside, Us is truly a horror movie, almost like a slasher film with a few touches of apocalyptic fiction.  The chase – the pursuit of the victim(s) by the killer(s) – has never been done the way Peele does it in Us.  Peele does what only a skilled horror movie director can do, put us right there with Adelaide and her family as they run away from a threat that not only wants to kill them, but also wants to enjoy some torture time before the stabbing and screaming.  Us' killers are as relentless as Jason Voorhees and Michael Myers.  [Meanwhile, Biblical foreboding suggests that an even larger danger looms.]  I don't think any other horror movie has made a pair of scissors as scary as Us does, although there have been some gruesome moments featuring scissors in horror movies going back decades.  Peele makes scissors scarier than horror movie machetes, axes, and large kitchen knives.

As Us' “scream queen” (of a sort), Lupita Nyong'o gives a riveting and hypnotic performance as Adelaide.  I must say that if a horror movie lead every deserved an Oscar nomination, Lupita certainly deserves one for her turn as Adelaide.  The great actress Kathy Bates won a best actress Oscar for playing Annie Wilkes in Rob Reiner's film, Misery (1990), which was based on a Stephen King novel.  With that in mind, Lupita deserves at least an Oscar nomination.

I don't think that Us is quite on par with Get Out, but Us is equally (if not more) thought-provoking.  What does it all mean?  I guess in the end the meaning is all up to Us.

Posted by Leroy Douresseaux at 6:37 PM