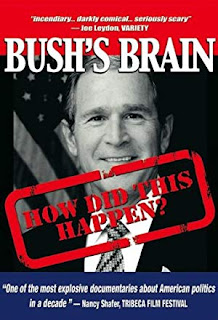 Bush's Brain is a 2004 political documentary film from writer-directors, Joseph Mealey and Michael Shoob.  The film is based on the 2003 nonfiction book, Bush’s Brain: How Karl Rove Made George W. Bush Presidential, from writers James C. Moore and Wayne Slater, who adapted their book for this film.  The film received a limited theatrical release on December 31, 2004, before becoming available on DVD in 2005.

Joseph Mealey and Michael Shoob's 2004 documentary, Bush’s Brain, takes a hard look at Karl Rove.  President George W. Bush’s closest advisor, Rove has almost single-handedly shaped the policies of our nation under President Bush.  Rove has perhaps been the leading mind behind the “Republican revolution” since the mid-1990’s, and he has certainly changed the way the Republican Party runs its campaigns both nationally and locally.

However, Rove’s extremely close relationship to President Bush (who has called Rove his “boy genius”) has raised a question that disturbs some Americans, particularly those on the left of the political spectrum: Who really runs this country?  Is Bush an hand puppet and Rove the hand, or to put it nicely, is Bush a not too bright a mouthpiece for Rove’s political agenda?

Bush’s Brain features interviews with a number of journalists, reporters, and political pundits – many from Rove’s former base of operations, Texas.   A few of Rove’s former colleagues and opponents also weigh in on the man, and the directors also include much archival footage and material of Rove – who declined to be part of this film.

While Bush’s Brain does explore Rove’s political journey to the top of the heap as the presidential advisor (mostly through interviews of people who have worked for and against him), the film is soft on coverage of Rove’s part in the rise of George W. Bush from a man who frequently bankrupted the companies he began as a young businessman to a two-term governor of Texas and a two-term President of the United States.

This film, at 80 minutes, is probably about 40 minutes too short.  In order for Bush’s Brain to really explore Rove and his influence on President Bush, the film not only had to talk about the controversial 2000 Presidential elections, but also Rove’s influence on policy during Bush’s first term.  The film actually spends a little time on the Iraq War – not enough, but there is a lot more to Bush’s first term than a war.  Quite a bit of domestic policy changed – some of it at the behest of Bush’s religious supporters, some of it for corporate donors, and others for individual wealthy supporters.  Much of that likely had Rove’s fingerprints on it.

This film’s obsession with Iraq (which it shares with other film and TV about Bush) overshadows the social and political changes that the country has undergone since George W. Bush became President.  Rove’s fingerprints are also all over that.  Perhaps, the next Bush’s Brain could turn away from war and Rove’s alleged dirty tricks election campaigning and take a deeper look at national policy – post election scandal.  Still, what is here is quite good.  The talking heads that directors Mealy and Shoob parade before us are intelligent, engaging, and have some damn good Rove stories to tell – some sad and others quite pitiful and tragic.