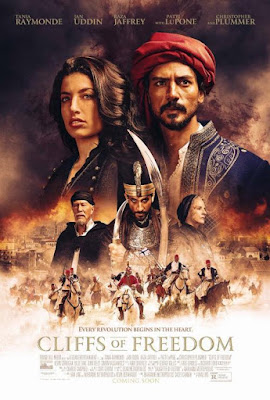 CLIFFS OF FREEDOM (also known as The Crescent and the Cross) is a 2019 independent historical period drama film.  It is based on Marianne Metropoulos's novel, Daughter of Destiny.  Produced by Casey Cannon and Metropoulos, Cliff's of Freedom is directed by Van Ling from a screenplay by Ling, Metropoulos, and Kevin Bernhardt. It stars Tania Raymonde, Jan Uddin, Raza Jaffrey, Patti LuPone, and Christopher Plummer.

After rousing screenings in the past weeks and during its opening weekend in New York and Los Angeles, "Cliffs of Freedom" is getting enough crowd-pleasing buzz that it is expanding to five more American cities as of Friday, March 8th, 2019.  Those cities are: Chicago, Illinois; Baltimore, Maryland; Washington DC; Phoenix, Arizona; and Dallas/Fort Worth, Texas.

Like the freedom fighters it depicts, the film is much more than it seems at first glance.  Currently one of the best-kept secrets in Hollywood, this independent historical film about romance, rebellion and tragedy at the dawn of the Greek War of Independence in the early 1800s is engaging audiences of all kinds, raising pride in those of Greek heritage and sweeping up non-Greeks in an epic and little-explored history, and bringing more than a few emotional tears to both.