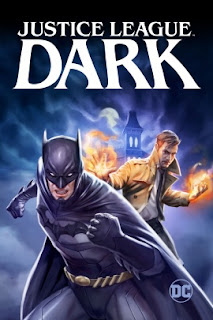 Justice League Dark is a 2017 straight-to-video animated superhero film from Warner Bros. Animation.  It is the 27th film in Warner's line of “DC Universe Animated Original Movies.”  This film features a supernatural-leaning version of DC Comics' Justice League.  Called “Justice League Dark,” this team was introduced in the 2011 comic book created by writer Peter Milligan and artist Mikel Janin.  Justice League Dark the film focuses on a group of beings with supernatural powers that join together to fight against supernatural villains.

Justice League Dark opens with a series of violent murders in the cities of Metropolis, Gotham, and Washington, D.C.  These murders are committed by people who believe that they are being attacked by demonic creatures, or so they say after being stopped by members of the Justice League.  The truth is that they are hallucinating, and these hallucinations cause them to see the people around them, including their family and friends, as demonic creatures.

The Justice League, which includes such as heroes as Superman (Jerry O'Connell), Wonder Woman (Rosario Dawson), and Green Lantern (Roger Cross), conclude that magic is behind these visions of demonic creatures, but Batman (Jason O'Mara) is skeptical.  However, an encounter with Deadman/Boston Brand at Wayne Manor, convinces Batman to join Deadman and Zatanna (Camilla Luddington), the powerful magician, to find Zatanna's ex-boyfriend, John Constantine (Matt Ryan).

A con man, Constantine is a powerful exorcist and magic user and is also the custodian of the “House of Mystery.”  Constantine may be the key to finding the source behind the demonic visions.  Joined by Jason Blood (Ray Chase) and Etrigan the Demon (Ray Chase), this odd group forms a dark version of the Justice League in order to battle a centuries-old sorcery named Destiny (Alfred Molina).

In Justice League Dark, several characters fling explosive magical energy blasts about.  There are several battles that look like mini versions of the epic battle between Albus Dumbledore and Lord Voldemort in the film, Harry Potter and the Order of the Phoenix (2007).  My experience with such DC Comics characters as Constantine and Zatanna is different from what this film offers, which is that they are not wielders of combat magic, but maybe they have on occasions that I missed.

Still, this is an entertaining movie.  Although I found myself wanting to dislike it, it is strangely entertaining, surprising me that I enjoyed it a lot.  Perhaps, Justice League Dark is capable of casting a spell.  It is weird and has an eclectic cast and some nice plot twists.  There is no need to say any more.  Fans of the DC Animated Movie Universe will want to see this.

Posted by Leroy Douresseaux at 9:59 PM