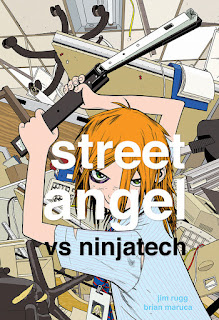 STREET ANGEL TAKES ON THE NINJA-INDUSTRIAL COMPLEX THIS NOVEMBER

After a hard fight with Ninja Carl, the deadliest girl alive seeks revenge—against the company that manufactured his dangerous weapons. It sure is convenient that it’s take-your-daughter-to-work day!

In her new adventure, Street Angel makes some friends, kinda; helps out a witch, sorta; and fights the Assassin of the Future™: the Ninja 6000 ® by Ninjatech.

It will be available in bookstores on Tuesday, November 13th and can be preordered via Amazon, Barnes & Noble, Books-A-Million, Indiebound, and Indigo.

“STREET ANGEL remains as charming, inventive, and pitch-perfect as it was in the beginning. An indie-comics classic!” —Hope Larson (All Summer Long, A Wrinkle in Time: The Graphic Novel)

“With great style and flair, Rugg delivers another stellar story of the ever-sassy Jesse Sanchez, a.k.a. Street Angel. Jam-packed with tween angst, humor, action, and fun, this book is a must-read for the rebel set.” —Cecil Castellucci (Shade, the Changing Girl, Soupy Leaves Home)