Review: "The Birth of a Nation" Offers a Counter Narrative 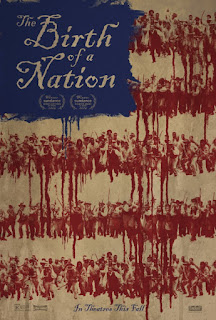 The Birth of a Nation is a 2016 historical film and slave drama from director Nate Parker, who has the film's starring role.  A joint American and Canadian production, The Birth of the Nation is a fictional account and dramatization of the Black American slave Nat Turner (October 2, 1800 – November 11, 1831), his life, and the rebellion of slaves and free Blacks that Turner led in Southampton County, Virginia on August 21, 1831.

The Birth of a Nation takes its name from from D.W. Griffith's 1915 silent movie and KKK propaganda film.  In Birth of a Nation 2016, Nat Turner, a literate slave and preacher in the antebellum South, orchestrates an uprising.  The film received some of its financing from professional basketball players and NBA stars Michael Finley and Tony Parker.  Among the film's executive producers are Oscar-winning filmmaker, Edward Zwick (Shakespeare in Love), and screenwriter and director David S. Goyer (The Dark Knight and Blade film franchises).

The Birth of a Nation opens in the antebellum South, where Elizabeth Turner (Penelope Ann Miller) teaches a Black child slave, Nat (Tony Espinosa), to read.  Years later, Nat Turner (Nate Parker) is not only a field slave (picking cotton), but he is also a literate slave preacher.  A friend tells Nat's White slave owner, Samuel Turner (Armie Hammer), that other White slave owners need something to suppress their Black slaves, whom they believe to be unruly, disobedient, and indignant.  That friend suggests that Nat's preaching, popular with many of the slaves, could earn the financially strained Turner money from owners that want a slave preacher who can preach their slaves into submission.

As he travels with his owner, however, Nat sees countless atrocities committed by White masters against their Black slaves, many of the same that are committed against himself and the slaves at Turner's and other plantations.  Seeing himself as God's chosen instrument of freedom, Nat gathers trusted followers and prepares for a sign to lead a rebellion.

The 21st century has seen a rise in the number of African-Americans and people of color behind the camera in the American film industry.  The result is two great American films about slavery, one being the “Best Picture” Oscar-winner, 12 Years a Slave.  A second is The Birth of a Nation from writer-director Nate Parker.  However, this film was overshadowed by Parker's past (alleged rape charges that led to a trial in which Parker was acquitted – 1999 to 2001).

It is a shame that controversy overshadowed a film that is one of best of the decade, but it is also a truly unique film.  There are many powerful performances in this film:  Parker as Nat Turner, Penelope Ann Miller as Elizabeth Turner; Aunjanue Ellis as Nancy Turner; Aja Naomi King as Cherry Turner; Esther Scott as Bridget Turner; and Colman Domingo as Hark Turner.

For all those fine performances, what makes The Birth of the Nation 2016 unique is that it is like a folk tale or a fairy tale, as much as it is a period drama or biographical film.  Parker and Jean McGianni Celestin, who co-wrote the film's story, seem to approach Nat Turner as both a figure of history and of myth.  African-Americans, Black slaves, and White people (slave owners and otherwise) had and have different interpretations of Turner and his rebellion.

Thus, The Birth of the Nation 2016 clearly demarcates the line between good and evil; kindness and hate; and good and greed.  However, the righteousness of, the success of, and/or the meaning of Nat Turner's actions and his rebellion are left up to interpretation.  One can say the same about this film because it is a bold vision that demands the viewer grapple beyond viewing it as entertainment or as a pastime.  It is a story about the story of our nation, the good ol' U.S. of A, and how one sees the nations will affect how one views this film.

This film is built on powerful visuals that tell the story, more than it is the script that tells the story.  The visuals are not about sensation, but are about narrative.  The Birth of a Nation 2016 is a counter-myth to the story of the United States of America.


The text is copyright © 2018 Leroy Douresseaux. All Rights Reserved. Contact this site for reprint and syndication rights and fees.