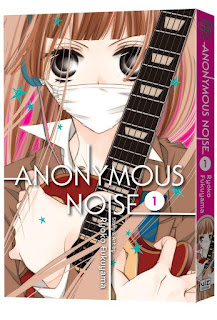 The series, by creator Ryoko Fukuyama, is rated ‘T’ for Teens and will be published under the Shojo Beat imprint. Volume 1 will carry a print MSRP of $9.99 U.S. / $12.99 CAN. ANONYMOUS NOISE also launches digitally via VIZ.com and the VIZ Manga App, as well as from the Nook, Kobo, Kindle, iBooks, comiXology, and GooglePlay stores. Subsequent volumes of ANONYMOUS NOISE will be published in English on a bi-monthly basis.

In the series, Nino Arisugawa, a girl who loves to sing, experiences her first heart-wrenching goodbye when her beloved childhood friend, Momo, moves away. And after Nino befriends Yuzu, a music composer, she experiences another sad parting! Both boys promised Nino that they would find her one day through her singing, so she holds on to that hope and continues to reach out with her voice. Now in high school, Nino serendipitously reunites with Yuzu, but she yearns to see Momo again…

“Creator Ryoko Fukuyama’s energetic pacing and stylized artwork help create a powerful story that showcases the longings of the heart,” says Amy Yu, Editor. “With a focus on the pangs of unrequited love and a developing love triangle, this new shojo series explores how music can help channel and enhance love. As Nino’s conflicted feelings emerge, the stage is set for an engrossing read that is sure to captivate both new and veteran shojo manga fans!”

Creator Ryoko Fukuyama is the author of Nosatsu Junkie, Monochrome Shonen Shojo and Shinzou ga Tarinai (Not Enough Heart). Her series, ANONYMOUS NOISE, will be adapted into an anime in the spring.

Posted by Leroy Douresseaux at 4:24 PM