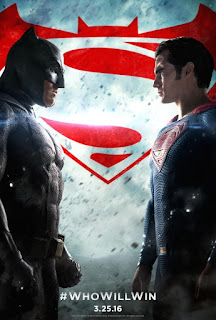 [This review was posted on Patreon.]

Batman v Superman: Dawn of Justice is a 2016 superhero drama and action-fantasy film from director Zack Snyder.  The film unites DC Comic' two most famous superheroes, Superman and Batman, in an epic conflict.  In the film, Batman battles Superman for fear of what the Man of Steel might do if his actions are left unchecked.  DC Entertainment boss, Geoff Johns, and director of “The Dark Knight Trilogy, Christopher Nolan, are two of the film's executive producers.

Batman v Superman: Dawn of Justice opens 18 months after the events depicted in the film, The Man of Steel (2013).  The destructive battle between Superman (Henry Cavill) and General Zod (Michael Shannon) left much of the city of Metropolis in ruins and made Superman a controversial figure.  People were also killed and maimed in the battle between Superman and Zod, including employees working for Bruce Wayne (Ben Affleck).

Wayne has operated in Gotham City as the vigilante, Batman, for nearly two decades, but he sees Superman's activities as a threat to humanity.  Conversely, Clark Kent (Henry Cavill) a.k.a. Superman sees Batman as a dangerous vigilante who has taken the law into his own hands, and Kent wants to expose Batman via a series of articles in the newspaper for which he works, the Daily Planet.

Now, it seems that Batman and Superman are destined to clash, but there is a threat to both of them.  LexCorp mogul and wunderkind, Lex Luthor (Jesse Eisenberg), is formulating a dark plot to destroy both costumed superheroes.  Can Batman and Superman stop fighting each other in time to save the world, the lives of their loved ones, and their own lives?

Batman v Superman: Dawn of Justice has such high-end production values that it could be mistaken for a sumptuous costume drama headed for Oscar glory.  Batman v Superman has gorgeous photography with colors so rich that you might want to dine on them.  The budget-busting visual effects and CGI are mesmerizing.  The spectacular urban vistas will make you want to move to Metropolis, and the action set pieces will make your heart pound.  There is a chase scene with the Batmobile that rivals anything in The Fast and the Furious franchise.

That said:  Batman v Superman: Dawn of Justice does not quite come together.  It is filled with good scenes, but this film seems like two movies – one about Superman and the other about Batman – that are forced together so that they will be a single movie about both Batman and Superman.  The movie does sell the notion that these two heroes could be adversaries, but when it tries to sell them as allies, that does not quite work.  There was too much versus in Batman v Superman: Dawn of Justice for these two headliners to suddenly turn friendly towards each other.

Jesse Eisenberg is terrible as Lex Luthor.  I don't know if it was his decision or that of the studio to make Luthor Superman's Joker, but it is just wrong.  Gal Gadot is pretty, but her Wonder Woman is not that good, either.  When Wonder Woman first appears in costume in the big battle scene, I was excited to see her, but the fact that Gadot is so stiff in her acting made me lose my joy for Wonder Woman.

Ben Affleck is equally stiff as Bruce Wayne and only a tiny bit better as Batman, but not by much, though Lord knows he tries.  I want to give him credit for that, in spite of myself.  Henry Cavill actually convinced me that he is the right man to play both Clark Kent and Superman.  I think Amy Adams is excellent as Lois Lane, but she needs more screen time.  It is the same with Laurence Fishburne as Perry White, editor of the Daily Planet.

Jeremy Irons, who is good as Bruce Wayne's “butler,” Alfred Pennyworth, has said in press interviews that Batman v Superman: Dawn of Justice's biggest problem is that it lacks drama.  Yeah, this film has no dramatic heft.  As good as it looks, it's all visual sound and fury with a narrative that signifies practically nothing.  Batman v Superman: Dawn of Justice is watchable, but it should have been something more than the average, loud, big-budget, star-laden, event movie it is.  In a way, I think Warner Bros. wanted it to be nothing more than that.

Posted by Leroy Douresseaux at 11:16 AM