Review: "Son of Batman" Has a Star in Batman's Son 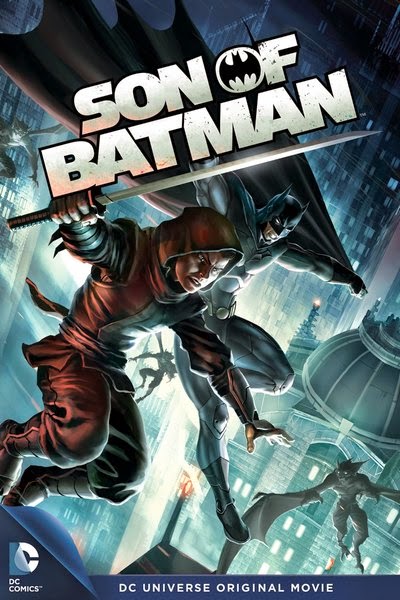 Son of Batman is based on the 2006 comic book story arc, “Batman and Son,” by Grant Morrison and Andy Kubert (published in Batman #655 to 658).  In Son of Batman the movie, Batman learns that he has fathered a child who is now an unruly pre-teen boy with a strong desire to ruthlessly kill his enemies.

Son of Batman opens in the secret mountain fortress of The League of Assassins.  There, Ra’s al Ghul (Giancarlo Esposito) and his daughter, Talia (Morena Baccarin), train the members of the league (who seem to be mostly ninja) in the art of terrorism and killing.  Without warning, Slade Wilson a/k/a Deathstroke (Thomas Gibson) leads an attack on the fortress.  Deathstroke, Ra’s al Ghul’s once chosen successor, has returned for revenge, and he succeeds in killing Ra’s.

Talia realizes that Deathstroke’s next target is her son, Damian (Stuart Allen), so she spirits the boy away to Gotham City.  There, she introduces him to his father, Bruce Wayne/Batman (Jason O’Mara), and leaves the boy in Bruce’s care.  However, Bruce Wayne and his loyal friend/butler, Alfred Pennyworth (David McCallum), soon learn that Damian is violent, disobedient, and unmanageable.

Damian is determined to find Deathstroke in order to avenge his grandfather, Ra’s, so it is up to Batman to help his son before he makes things worse or gets himself killed.  Dick Grayson/Nightwing (Sean Maher), who was once Batman’s original sidekick, Robin, returns to help Batman control his kid.

I find Son of Batman to be rather entertaining, mostly because of the character of Damian Wayne.  He’s a delightful, lovable brat, and his penchant for killing and maiming is scandalous in an appealing way rather than being edgy in a troubling way (although I guess that even a murderous fictional child should be troubling).  I wish Son of Batman had even more of the son of Batman; in fact, I wouldn’t mind watching a movie built around Damian Wayne.

The other characters are good, but, other than Batman, there aren’t enough of them.  Deathstroke, a most excellent villain, really exists at the periphery of the film’s story.  There also should have been more scenes depicting the obvious rivalry between Dick Grayson/Nightwing, Batman’s first “son,” and Damian, Batman’s “blood” son.  And Talia is a seriously messed up bitch; the movie needed more of her.

It is obvious that 74 minutes of runtime is not long enough for all the characters and subplots in Son of Batman.  This movie would be better if it were longer and little uncut.