Review: Being Remastered Made "Star Trek III: The Search for Spock" Better 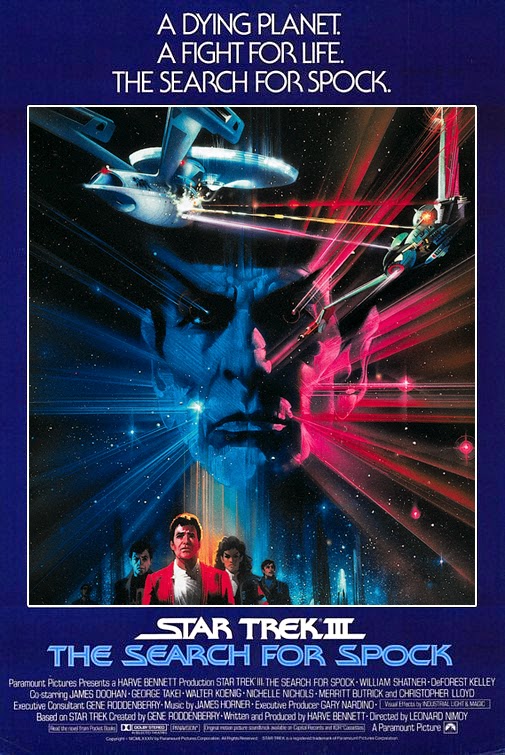 The subject of this movie review is Star Trek III: The Search for Spock, a 1984 science fiction action-adventure film.  It is the third movie in the Star Trek film franchise, which is based on “Star Trek,” the science fiction television series created by Gene Roddenberry and originally broadcast on NBC from September 1966 to June 1969.  In The Search for Spock, the crew of USS Enterprise goes on a mission to recover the body of friend and crew mate, Spock, and finds more danger than they expected.

The Search for Spock follows the events depicted in Star Trek II: The Wrath of Kahn.  Admiral James T. Kirk (William Shatner) won the battle against his ghost-from-the-past, Khan Noonien Singh, but it was a hollow victory.  The USS Enterprise limps back to Earth.  Doctor Leonard McCoy (DeForest Kelley) is going insane.  And Captain Spock (Leonard Nimoy) is dead… or is he?

Spock’s father, Sarek (Mark Leonard), confronts Kirk about leaving Spock’s body in a casket on the “Genesis planet” which was created by the “Genesis device.”  Sarek tells Kirk that there might be hope for Spock.  Kirk and his bridge crew:  Montgomery Scott (James Doohan), Hikaru Sulu (George Takei), Pavel Chekov (Walter Koenig), and Uhura (Nichelle Nichols), risk their careers by stealing the decommissioned Enterprise to return to the now-restricted Genesis planet to recover Spock’s body.

Meanwhile, Kirk’s son, David (Merritt Butrick), one of the creators of Genesis, returns to the Genesis planet with the Vulcan, Lieutenant Saavik (Robin Curtis), to investigate strange sensor readings emanating from the planet.  Neither realizes that an ambitious and murderous Klingon commander named Kruge (Christopher Lloyd) is also interested in the Genesis device.  Kruge is leading his Klingon ship, the Bird of Prey, to the Genesis planet, determined to obtain the secrets of Genesis.

2014 is the 30th anniversary (specifically June 1, 1984) of the original theatrical release of Star Trek III:  The Search for Spock.  It was the first Star Trek film that I saw in a movie theatre.  Before I saw it, all I knew of the film’s plot was that it involved Spock, who was dead, and that the Enterprise was destroyed in the film.  From news media reports and through word-of-mouth, I heard that some Star Trek fans (“Trekkies” or “Trekkers”) were furious about the destruction of the ship.

When I finally saw the movie, I did not find myself particularly upset about the Enterprise’s destruction.  It was done.  What could I do about it?  What did upset me was (Spoiler!) the brutal stabbing death of Kirk’s son, David, at the hands of a Klingon.  For years, I thought Kruge had actually done the stabbing, but he only gave the order to kill a prisoner.  For years, also, I avoided The Search for Spock because I found David’s death upsetting and troubling in a way I could not explain then and cannot explain now.

This recent viewing of The Search for Spock is the first time that I have seen the film in its entirety since watching it a second time on VHS in either 1984 or 1985.  I don’t remember how much I liked the film then, but I now find myself quite fond of it.

I won’t lie and say that The Search for Spock is great; it is not.  Some of scenes have blatantly bad acting.  The last ten minutes of the film is somewhat marred by tedious mysticism.  Still, Christopher Lloyd’s turn as Kruge is both brilliant and unique.  His is one of the best and most memorable performances of a villain in a Star Trek film.

Besides Lloyd, two other things about The Search for Spock grabbed me.  First, the race to recover Spock against the ticking clock of the doomed Genesis planet coupled with the Klingon threat is a captivating hook.  Secondly, the theme of camaraderie, as exemplified by the crew of the Enterprise and measured against the blood-thirsty Kruge, makes me forget this film’s blemishes.  I know my feelings about Star Trek III: The Search for Spock are about me being nostalgic for “Star Trek classic,” but I would choose it over many other films, including many Oscar-winners, any old time of day.


Posted by Leroy Douresseaux at 11:32 AM