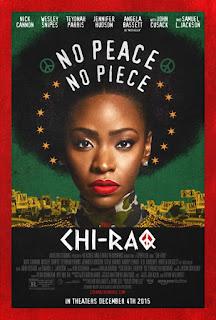 Chi-Raq is satirical political drama and musical from director Spike Lee.  Set in Chicago, Chi-Raq uses the classical Greek comedy play, Lysistrata (written by Aristophanes), as the basis for a story about the gang violence that is plagues real-world Chicago.  In Chi-Raq, a woman leads a group of like-minded females to challenge the on-going violence in Chicago's Southside.

Lysistrata (Teyonah Parris) dates Demetrius “Chi-Raq” Dupree (Nick Cannon), leader of the Spartans gang (who wear purple).  He is in the middle of an on-going war against the rival gang, the Trojans (who wear orange), lead by Cyclops (Wesley Snipes), who orders a hit on Chi-Raq during a Spartan music concert.

After Chi-Raq (presumably) kills a child with a stray bullet during a shootout, Lysistrata finds herself having to examine her part in the ongoing violence in Chicago's Southside.  Lysistrata organizes a group of women who are associated with male gang members and encourages them to withhold sex from their men until they stop the violence.  Lysistrata's movement challenges the nature of race, sex, and violence in the United States of America, and it begins to spread around the world.  However, as more people go without sex, the movement raises tensions in all of Chicago.

Chi-Raq is another bold stroke of idiosyncratic Spike Lee art.  Lee was Kanye West before Kanye West.  Stubborn and independent from the beginning, Lee remains that way.  Chi-Raq is everything it seems:  political satire, social satire, farce, comedy, Negro spiritual, racial drama, soulful musical, and even a cry in the wilderness to Black folks in America.  “Stop killing ourselves!” Lee screams via his art.  If only it were that simple.

Chi-Raq is film art, beautiful, poignant, brash, colorful – all of it embodied by the full-throated, shameless narration of Samuel L. Jackson's refreshing Dolmedes.  In the end, hopefully, Chi-Raq can be more than art.  Can it initiate social change.  Well, the problems that it depicts and tackles are complicated and ingrained in ways that would have us throw up our hands in surrender if we took time to really think about those problems.

I can hope for the best, but in the meantime, I can appreciate a filmmaker who really deserves to be called a “visionary,” Spike Lee.  Chi-Raq is a testament to his imagination.

Posted by Leroy Douresseaux at 7:21 PM