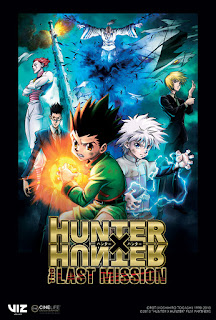 Presented in partnership with CineLife Entertainment, the event cinema and alternative programming division of Spotlight Cinema Networks, HUNTER X HUNTER: THE LAST MISSION will be presented in both subtitled and dubbed formats at select theaters nationwide.

In HUNTER X HUNTER: THE LAST MISSION, the Battle Olympia tournament at Heaven’s Arena is about to begin! Gon, Killua, Kurapika and Leorio plan on watching the matches along with the other Hunters and VIPs in attendance. As they wait, a raid by The Shadow ends the festivities. Skilled fighters fall one by one to their terrifying ability called On, a dark power derived from malice. When their leader Jed captures Netero and declares death to all Hunters in the name of vengeance, Gon and Killua rush to defeat him! Catch the HUNTER X HUNTER: THE LAST MISSION trailer at https://youtu.be/DbylrrZ6C_k.

“We are excited to partner with CineLife Entertainment for the first time to bring HUNTER X HUNTER: THE LAST MISSION to all corners of the nation,” says Brian Ige, Vice President, Animation. “Audiences can enjoy all the must-see action in theaters filled with fellow HUNTER X HUNTER fans this month!”

"We are thrilled to be able to offer the theatrical North American premiere of VIZ Media’s anime adventure HUNTER X HUNTER: THE LAST MISSION to all fans and audiences," says Mark Rupp, Managing Director, CineLife Entertainment.

For additional information on HUNTER X HUNTER and other anime and manga titles published by VIZ Media, please visit viz.com.