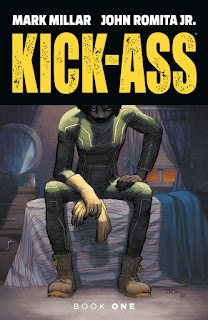 PORTLAND, OR — Image Comics is pleased to announce that the beloved KICK-ASS series is back with an all new story arc and the perfect jumping-on point for new readers this September in KICK-ASS: THE NEW GIRL, VOL. 1 by Mark Millar and John Romita Jr. This trade paperback will collect issues #1-6 of THE NEW GIRL story arc.

In KICK-ASS: THE NEW GIRL, VOL. 1, Kick-Ass returns readier than ever to wipe out the city's criminal lowlives, destroy its gangs, and save its communities from decay. But there’s a new face beneath the old mask, a new figure wearing that famous green and yellow spandex. Who is this new vigilante superhero? Who can fill Dave Lizewski’s shoes? WHO IS THE NEW KICK-ASS?

It can be pre-ordered on Amazon, Barnes & Noble, Books-a-Million, IndieBound, and Indigo.

“Off to a marvelous start and I can't wait to see where they take us.” —Black Nerd Problems

“I loved the introduction to the new Kick-Ass story arc, believing it to be a solid and impactful start. I find the new direction, new characters and new setting to be a refreshing shift in the Kick-Ass saga. I'm really looking forward to seeing Patience grow throughout her journey as Kick-Ass, and seeing where her new life will take her.” —Impulse Gamer

“Knocked it out of the park.” —Outright Geekery

“Turns everything you think you know about Kick-Ass on its head and presents a less comedic version of the character who has real issues balancing life with the job of a vigilante.” —SciFiPulse

“Hits the mark with its lead protagonist, Patience, whose realism and sense of self-perseverance sets her apart from other characters in the medium.” —ComicsVerse

Posted by Leroy Douresseaux at 11:07 PM