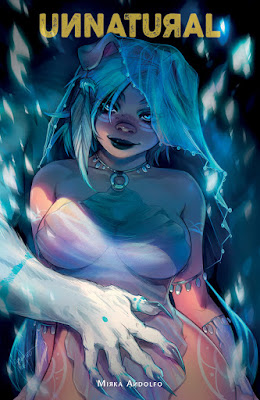 In UNNATURAL, a totalitarian government patrols the personal lives of its citizens, punishing transgressors who engage in “unnatural” relationships. According to this regime, individuals may only enter into relationships with those of the same race, and different gender, as themselves.

Sweet, unassuming pig girl Leslie dreams of something different for herself. But her dreams are becoming dangerous—they’ve begun to involve a mysterious wolf, for starters. And when she wakes, she could swear she’s being watched…

“This is my first time as a creator in the American comic world, and I can't describe how thrilled I am!” said Andolfo. “UNNATURAL is a series I worked on with passion for the last three years, and I'm happy that readers in the U.S., who're used to seeing my art on comics written by other people, will be able to find a book I wrote, illustrated, and colored—because, to me, ‘Mirka the Creator’ is as important as ‘Mirka the Artist.’ And in addition, to improve everything, I'm so excited to have the chance to be published by Image Comics. It could not have been better.”


ABOUT IMAGE COMICS
Image Comics is a comic book and graphic novel publisher founded in 1992 by a collective of bestselling artists. Image has since gone on to become one of the largest comics publishers in the United States. Image currently has six individuals on the Board of Directors: Robert Kirkman, Erik Larsen, Todd McFarlane, Marc Silvestri, Jim Valentino, and Eric Stephenson. It consists of five major houses: Todd McFarlane Productions, Top Cow Productions, Shadowline Comics, Skybound Entertainment, and Image Central. Image publishes comics and graphic novels in nearly every genre, sub-genre, and style imaginable. It offers science fiction, fantasy, romance, horror, crime fiction, historical fiction, humor, and more by the finest artists and writers working in the medium today. For more information, visit www.imagecomics.com.