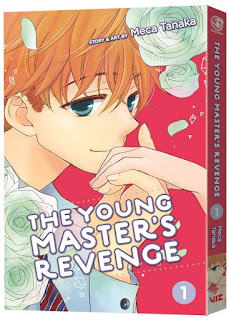 The series, by creator Meca Tanaka, is rated ‘T’ for Teens and will be published under the SHOJO BEAT imprint. Meca Tanaka is also the creator of the acclaimed shojo manga series METEOR PRINCE (also published by VIZ Media).

Volume 1 of THE YOUNG MASTER’S REVENGE carries a print MSRP of $9.99 U.S. / $12.99 CAN. The series also launches digitally via viz.com and the VIZ Manga App, as well as from the Nook, Kobo, Kindle, iBooks, comiXology, and Google Play stores. Future volumes will be published by VIZ Media on a quarterly basis.

In THE YOUNG MASTER’S REVENGE, when Leo was a young boy, he had his pride torn to shreds by Tenma, a girl from a wealthy background who was always getting him into trouble. Now, years after his father’s successful clothing business has made him the heir to a fortune, he searches out Tenma to enact a dastardly plan – he’ll get his revenge by making her fall in love with him!

“The creator of METEOR PRINCE returns with a new shojo manga from the perspective of the hero,” says Nancy Thistlethwaite, Senior Editor. “What begins as Leo’s revenge becomes a voyage of self-discovery and endearing love.”

For additional information on THE YOUNG MASTER’S REVENGE and other manga series published by VIZ Media, please visit viz.com.

Posted by Leroy Douresseaux at 3:18 AM