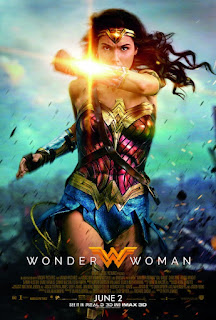 [This review originally posted on Patreon.]

Wonder Woman is a 2017 superhero fantasy, war, and and historical film from director Patty Jenkins.  The film stars the DC Comics superhero, Wonder Woman, who first appeared in All Star Comics #8 (1941) and was created by writer William Moulton Marston (with artist Harry George Peter).  The movie takes place when Wonder Woman was only known as Diana, princess of the Amazons, a young, trained warrior who goes out into the world to discover her full powers and her true destiny.  Wonder Woman is also the fourth film in the DC (Comics) Extended Universe film series.

Wonder Woman opens in present-day Paris, in the Louvre, where Diana Prince/Wonder Woman (Gal Gadot) works as an archivist of some type.   Bruce Wayne has sent her a gift, a World War I-era photographic plate that contains an image of Diana and three men.

This image returns Diana's memories to her past, beginning when she was a child (Lily Aspell) on the hidden island of Themyscira, home to the Amazon race of warrior women.  Diana is the daughter of the queen, Hippolyta (Connie Nielsen), who does not want her daughter trained to be a warrior.  Hippolyta's sister and Diana's aunt, General Antiope (Robin Wright), believes that Diana should be prepared for the eventual day when she will have to fight.

As a young woman, Diana rescues an American pilot and spy, Captain Steve Trevor (Chris Pine), after his plane crashes off the coast of Themyscira.  The Germans pursing Trevor invade Themyscira, but are repelled by the Amazons.  Diana interprets these events as signs that she must accompany Trevor as he returns to the world of men, where Diana believes she must confront the reason for the world war that rages across Europe (World War I).  Diana believes that Ares, the god of war, is behind the so-called “War to End All Wars,” but Diana does not realize that this journey will reveal the truth about her powers, her destiny, and her identity.

Since its release to theaters in the United States (almost a month ago as of this writing) and around the world (over a month as of this writing), Wonder Woman has received rave reviews.  Women and children, especially girls, have embraced the power of this beloved female superhero who finally stars in her own feature film.

I get it; I understand the appeal and the adoration, but for me, Wonder Woman the movie is, at best, a slightly above-average superhero movie.  Gal Gadot is wonderful as Wonder Woman, which surprised me because I thought she was all wrong when I first heard about her casting.  However, here, Gadot is so good that I had trouble imagining another actress (except maybe Linda Carter) as Wonder Woman.  Gadot embodies the strength and independence of a woman raised in a society in which women do not think of themselves as subordinate or inferior to men.

In the character drama, in the film's quiet moments, in the times when Diana fights for the forgotten and ignored (the “little” people?), director Patty Jenkins and Gal Gadot deliver on what Wonder Woman has meant, what she means today, and what she can mean in the future.  Jenkins and Gadot depict the ability of women to pursue the best of themselves and to pursue the best for humanity at large – with their endeavors as equal or even superior to those of men.  To nurture and to create; to defend and to take the initiative:  Wonder Woman/Diana and women can do anything men can do.

The problems with Wonder Woman the film are the men who contribute to this film.  Co-producer and co-writer Zack Snyder's handiwork is all over the cheesy, slow-motion camera fight scenes.  The fact that the last act devolves into a ridiculous supernatural battle between Diana and Ares is typical of the previous Warner/DC Comics films.  Those movies reeked with the ludicrous fights that were the climaxes of Snyder's The Man of Steel and Batman Vs. Superman: Dawn of Justice, as well as last year's Suicide Squad, which is also part of the DC Extended Universe.

Patty Jenkins and Gal Gadot deliver some superb movie making with Wonder Woman.  Unfortunately, the perspective of males, one of whom is a hack filmmaker, ruins it.

Posted by Leroy Douresseaux at 11:19 AM