Review: "Teen Titans: The Judas Contract" Turns Out to Be Fun 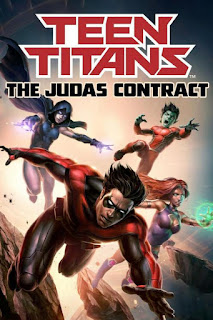 Brother Blood has grown tired of the Titans interfering in his plans, but he desires to possess their powers.  Blood hires the mercenary/assassin, Deathstroke (Miguel Ferrer), to capture the Titans, and to that end, Deathstroke has a spy inside the Titans.

For most of the 1980s, The New Teen Titans was one of DC Comics' most popular comic book titles, and for awhile, it was the publisher's most important and popular title.  “The Judas Contract” was The New Teen Titans' signature story line.  Teen Titans: The Judas Contract the movie is true to the spirit of the original story, both in depicting how close a team of disparate individuals can become and in depicting the sting of betrayal committed by one member against the rest of the team.

I really enjoyed this movie, and I am surprised that I liked all the characters and all the voice actors' performances.  Christina Ricci does stand out and conveys the pathos and conflict within Terra Markov, while Brandon Soo Hoo gives comedic depth and dramatic weight to Beast Boy.  I will note, however, that film director, Kevin Smith, appears as a cartoon version of himself, and Teen Titans: The Judas Contract could have done without him.

Posted by Leroy Douresseaux at 2:45 AM