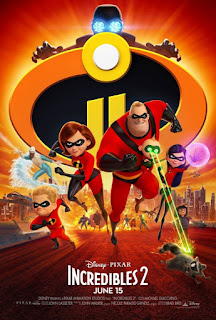 Incredibles 2 is a 2018 3D computer-animated film and superhero movie written and directed by Brad Bird.  Produced by Pixar Animation Studios for Walt Disney Pictures, Incredibles 2 is the direct sequel to Pixar's Oscar-winning, animated film, The Incredibles (2004).  Incredibles 2 finds the super-powered Parr family trying to balance normal life and having powers in a world where superhero activities are illegal, even as the world faces a dangerous new techno-villain.

Three months following Syndrome's defeat (as seen in The Incredibles), the Parr family continues to operate as superheroes.  Husband and father, Bob Parr, a.k.a. Mr. Incredible (Craig T. Nelson) and wife and mother, Helen, a.k.a. Elastigirl (Holly Hunter) have been superheroes for a long time, even before being a superhero was outlawed.  Now, they are joined their daughter, Violet (Sarah Vowell), and their son, Dashiell, a.k.a. “Dash” (Huck Milner), who both have powers.  Even baby son, Jack-Jack Parr, tags along on adventures.  The Parrs are the superhero team, The Incredibles.

However, The Incredibles family friend and fellow superhero, Lucius Best/Frozone (Samuel L. Jackson), are unsuccessful in preventing the villain, Underminer, from robbing Metroville Bank.  The Incredibles and Frozone's battle with this villain causes massive damage to the city.  In the wake of this disaster, the “Super Relocation” program that allowed the Parrs to be superheroes is ended, and they are being forced to permanently live as ordinary citizens.

Frozone later informs Bob and Helen that Winston Deavor (Bob Odenkirk), a superhero fan and telecommunications tycoon, and his sister, Evelyn (Catherine Keener), an inventor, have a plan to make superheroes legal again.  That plan includes using their company, DEVTECH, to spearhead a public relations plan that will free superheroes.  But a mysterious new villain, “The Screenslaver,” may wreck everyone's plans.

I liked the original film, The Incredibles, but I did not really warm to it.  Of course, as a fan of superhero comic books, I was happy to finally get an animated superhero film from a major Hollywood studio (Pixar) that obviously had the kind of production budget that usually went to prestige, big tent, Hollywood live-action films.  I loved the characters, but I did not like that The Incredibles mostly focused on Mr. Incredible.

First, let me say this, writer-director Brad Bird's story for this sequel has shockingly predictable outcomes for its main plot and for some of the subplots.  While watching this film, it was painfully obvious to me what the central conspiracy was, even if I was unsure if the Incredibles were facing a single primary adversary or several until midway through the film.  But I don't give a crap about predictability.  I finally got the Incredibles film that I wanted fourteen years ago.

In Incredibles 2, Brad Bird takes the potential of all the Parr family, not just Bob Parr/Mr. Incredible, but he also takes the potential of Helen and the Parr children and shows how great a character each one can be or is.  Incredibles 2 is really about the Incredibles – all of them, and I am happy.  There is a bonus, Bird takes the story shackles off Frozone and allows the character to be not just a superhero, but a major superhero.  And with more screen time, Samuel L. Jackson shines like sunlight reflecting off a snow-covered peak in his voice performance as Frozone.

Holly Hunter, an exceptional actress, stretches out as Bird expands Elastigirl's role.  She is good and brings dramatic heft to this film.  Craig T. Nelson brings more to Bob Parr, and this time, he shockingly gives pathos to Mr. Incredible/Bob Parr, as he excavates the male ego in this father/husband/hero.  Plus, the advertisements and trailers for Incredibles 2 are not lying; baby Jack-Jack is a non-stop scene-stealer and a heart-stealer.

You would say “d'uh” if I expounded on the technical virtuosity and wizardry of Incredibles 2.  Pixar always seems to be raising its own bar in showing what computer software and hardware can do in creating animated films filled with complex movement, action, drama, and environments and spaces.  So I will focus on what I think is the best thing about Incredibles 2.  I finally got a movie about all the incredible characters in this franchise.


The text is copyright © 2018 Leroy Douresseaux. All Rights Reserved. Contact this blog or site for syndication rights and fees.