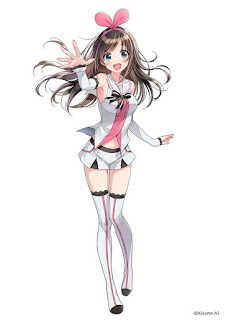 THE JAPAN ANIME MUSIC LAB. WEBSITE SPOTLIGHTS THE VIRTUAL YOUTUBER MUSIC PHENOMENON IN AN INTERVIEW WITH THE PRODUCER OF KIZUNA AI

JAMLAB. Showcases The Latest Trends In J-Pop And Ani-Song Music And Highlights A New Breed Of Pop Star With A Virtual YouTuber With More Than 2.6 Million Subscribers

Virtual YouTube stars, or “VTubers” comprise a colorful vanguard of digital celebrities who are building an ardent global following by redefining what a pop star is in the 21st Century. In the interview, Osaka explains how music and cutting-edge technology have aligned to create this new breed of pop star.

Catch the insightful interview with Takeshi Osaka exclusively on the JAMLAB. website at: https://japan-animemusic.com/en/news/news.html.

Kizuna AI is one of the world’s first virtual YouTuber stars and operates 2 popular channels on YouTube - "A.I.Channel” and "A.I.Games.” She currently has over 2.6 million subscribers and recently has begun to also garner a substantial following in China. Other popular Virtual YouTuber performers include Luna Kaguya, YuNi, tokinosora, Aoi Fuji. Virtual YouTuber artists are the latest addition to the scope of genres JAMLAB. features.

JAMLAB. supports the prolific Japanese pop/rock/hip hop/virtual music scene and has put a particular emphasis on anime song “ani-song” artists whose music is widely featured as the theme songs to popular anime series. The global popularity of anime now presents these artists with a wider platform than ever before to bring their music to an international fan base.

Continued technological innovation combined with an expanding international fan base for virtual pop stars have also inspired a talented cadre of Japanese designers, producers and digital innovators to create the next generation of virtual pop stars with Virtual YouTubers such as Kizuna AI. JAMLAB. embraces this continued evolution and looks to help raise the profile of these stars among a global audience of fans and industry professionals.